Please enter your email address. Instructions for retrieving your username and password will be emailed to you.

Please enter your username and create a new password.

The Stevenson girls volleyball camp is an overnight camp for rising 7th through 9th graders. The camp is located on our Pebble Beach Campus. Campers will be immersed in dorm life and top-notch athletic facilities, all while being minutes from the beach. The focus of the camp is to learn and/or refine the fundamental six volleyball skills, specific positional training, as well as team defense, offense, and strategy.

Daily Schedule
Camp will be comprised of three sessions (morning, afternoon, and night).

Lodging and Meals
Campers share a room with one or two other campers in the Stevenson dormitories. The dorms are divided by age, have spacious common areas, and also house the counselors. Breakfast, lunch, and dinner are planned meals served in Stevenson's cafeteria at Reid Hall.

Yes. There will be snacks for purchase between sessions and meals at the camp store.

Weather can vary. The temperature tends to be around 57-60 degrees Fahrenheit. We also have an unpredictable marine layer that can make conditions colder at times.

Campers will be extremely active over the duration of the camp. We suggest that campers pack a few extra articles of each item of clothing. Although we are extremely close to the ocean, please pack warm clothes (long sleeve, sweatshirt, sweats) as well.

If you would like to watch a session, please contact Maddy Underwood for more information regarding appropriate times and dates.

Maddy Underwood is from Spokane, Washington. She went on to play Division 1 volleyball at Grand Canyon University where she redshirted and then played 1 season as an Opposite. In 2015 she made the move to California State University at Monterey Bay to continue her final 3 years of eligibility. She stepped in as a setter for a year due to team injuries and then continued her last two years as an Outside Hitter. She was a team captain from 2016–2018 and was CSUMB’s scholar athlete of the year in 2016-17 as well as All-CCAA honorable mention. During her senior season, she was selected First Team all-CCAA as well as CSUMB’s female athlete of the year in for the 2017-18 season, helping lead the team to their first-ever appearance at the CCAA conference tournament. 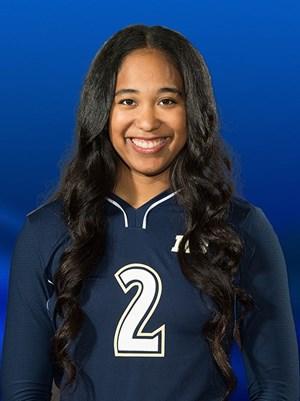 Originally from Southern California, Skyler Allen was recruited to play Division 2 for the California State University, Monterey Bay’s volleyball team in 2013. She played middle blocker and outside hitter her freshman year, moved to the right side, and ending up playing all three front row positions in her final season. After graduating, she began coaching the JV team at Stevenson School and working at Salinas Valley Memorial Hospital in Health Technology. She will be returning for her third season at Stevenson this fall.

Chandler is originally from Visalia, California and came to Monterey to play Division II volleyball at California State University, Monterey Bay. She trained and played as a middle blocker from 2015-2018. She was a team captain her senior year and helped lead the team to their first ever co-first place title of the North in the CCAA. Her career in the middle landed her at number four in total blocks on the leaderboard. During her time as a student-athlete, Chandler was heavily involved in CSUMB’s Student Athlete Advisory Committee and also received multiple all conference academic honors.

Chandler is in the process of receiving her Multiple Subject Teaching Credential as well as her Master’s in Education at CSUMB. She hopes to be teaching elementary within the Monterey Peninsula in the next year. She is currently an assistant coach for CCVC, as well as a head co-coach for Lil Coasters (a youth clinic under CCVC).

Whitney was born and raised in Huntington Beach, California. Unable to completely leave the small town/ beach city vibe, California State University Monterey Bay was an easy transition as well as a welcoming volleyball family. Having the most training as a setter, Whitney played four of her five seasons as a setter at CSUMB. After an injury that kept her from playing her true her senior year, Whitney played her fifth and final season as a right side hitter. During her time as a student-athlete at CSUMB, Whitney received multiple all conference academic honors as well as served three years on the school’s Student Athletic Advisory Committee. Whitney’s focus at CSUMB in Liberal Studies with a minor in History have led her into an upcoming career as a high school history teacher. She is currently completing her final push in school to receive her Teaching Credential as well as her Master’s in Education at CSUMB. In a year’s time, she hopes to be teaching within the Monterey Peninsula as well as helping the volleyball program at whichever high school program she is lucky enough to land in.